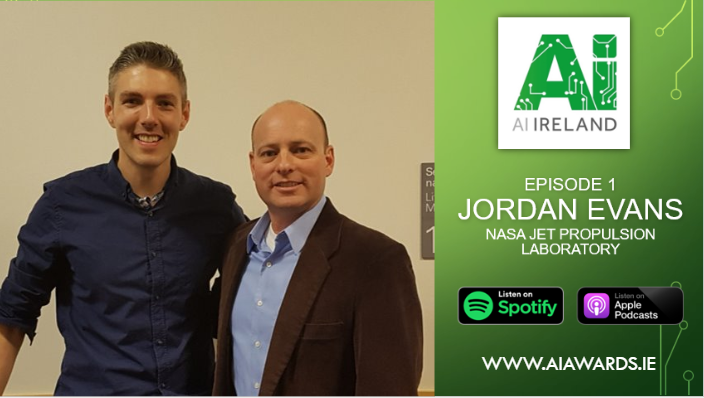 Welcome to episode one of the AI Ireland podcast, the show that breaks down the hype and explores the impact that Data Science, Machine Learning and Artificial Intelligence are making on our everyday lives.

Our goal is to share with you the insights of technologists and data science enthusiasts to showcase the excellent work that is been done within AI in Ireland.

On today’s episode, I sit down with Jordan Evans, who is the Deputy Director for Engineering and Science at NASA’s Jet Propulsion Lab in Los Angeles.

After finishing his undergraduate degree in Aerospace Engineering, Jordan went to work for Northrop on the B-2 Stealth Bomber but he soon he realised that space exploration was his true calling. He moved to Maryland to work for NASA Goddard in the Advanced Applications Section and worked on the Far Ultraviolet Spectroscopic Explorer (FUSE) and on Wide Field Camera – 3 (for the Hubble Space Telescope).

He then moved to Phoenix, Arizona to become the Chief Engineer/Deputy Program Manager for the Gamma Ray Large Area Space Telescope (GLAST) at Spectrum Astro. While at Spectrum, he met several people from JPL and then moved to the Pasadena area in early 2004 to live the Caltech/JPL culture and work on their exciting missions.

The Jet Propulsion Laboratory is a unique national research facility that carries out robotic space and Earth science missions. JPL helped open the Space Age by developing America’s first Earth-orbiting science satellite, creating the first successful interplanetary spacecraft, and sending robotic missions to study all the planets in the solar system as well as asteroids, comets and the Earth’s moon. In addition to its missions, JPL developed and manages NASA’s Deep Space Network, a worldwide system of antennas that communicates with interplanetary spacecraft.

I recently got the chance to see Jordan speak at last month’s Dublin Tech Summit and I was delighted to get a few minutes of his time to interview him for the show.

In this episode, you will learn about:

What did you enjoy most about Jordan’s podcast? Where do you see the future of AI heading in the near future? I would love to hear your thoughts so please leave a comment below.

Best Application of AI in a Student Project

Best Application of AI in a Startup